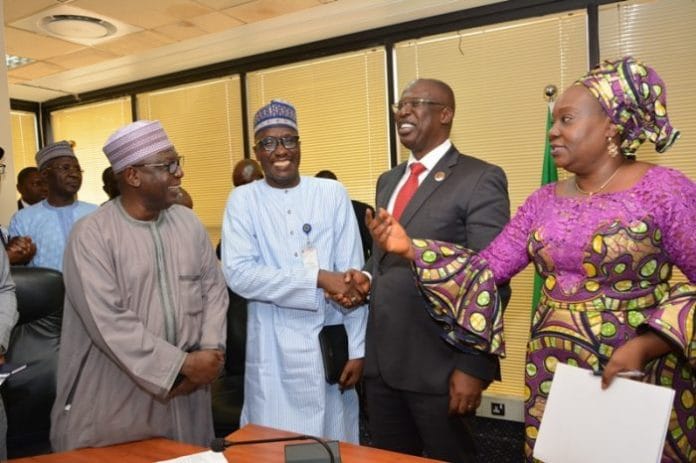 At exactly 2.34 p.m., Chief Timipre Sylva, a former Bayelsa State Governor accompanied by his wife came straight from the Ministers’ inauguration to resume as the new Honourable Minister of State for Petroleum.

The Permanent Secretary of the Ministry, Dr. Folasade Yemi-Esan who has been a part of the inauguration of the Ministers earlier in the Presidential Villa came in with the new Honourable Minister of State who was taken straight to his new Office.

The Permanent Secretary, Dr. Folasade Yemi-Esan gave a welcome address where she reassured the new Honourable Minister of State and by extension the wife that the Ministry is a warm environment for the crucial work the Minister will soon be doing. She further assured that there is a good and competent team of Directors in the Ministry and Chief Executives of Agencies which will ensure that the Chief Timipre Sylva makes a success of the work he is coming to the Ministry to do.

In response, Chief Timipre Sylva taking a cue from the Permanent Secretary who had earlier stated that the occasion was not a formal briefing event but simply to welcome the new Minister and to help him put a name to the faces before him, said that he would want to receive briefs from the Ministry and Agency Heads, and also study the mandate brief which the President promised will also be given to him to work with before knowing which way forward for the Ministry.